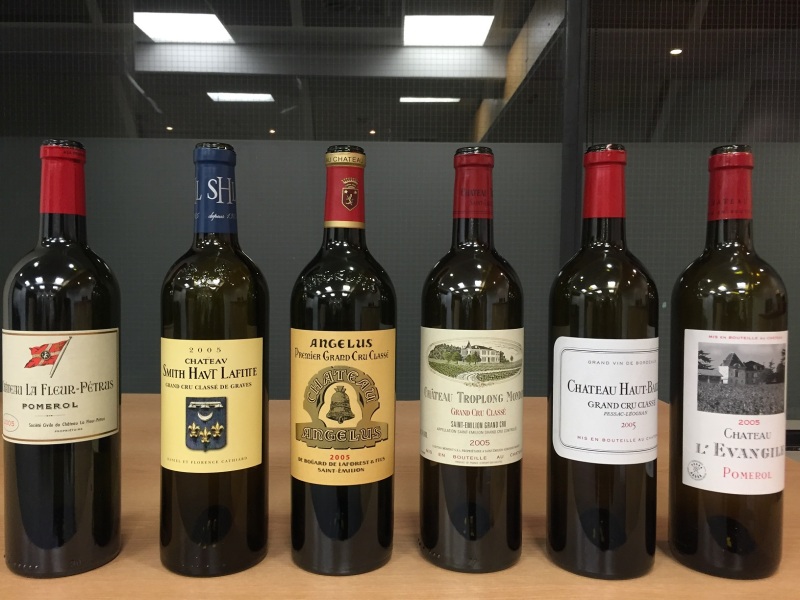 The 2005 vintage in Bordeaux is considered a contender for the finest vintage there since 1982. Steven Spurrier wrote in the May 2016 edition of Decanter about a 2012 Claret tasting where the participants ranked the 2005 vintage above all the vintages post-2000, and ahead of 2009 and 2010.

This month the Magnum Society offered me an opportunity to taste a horizontal of 2005’s from famous Bordeaux chateaux that I would never ordinarily have the chance to try due to their relative scarcity and cost. And this included a couple of Robert Parker 100-pointers! Wow, another first.

I was looking forward to this evening very much.  It would be my first look at quality Clarets…

JC from the Society presented the wines to us, and here is a summary of his excellent notes accompanying the tasting:

“The dry growing 2005 season produced grapes of exceptional maturity and concentration with the (then) highest recorded levels of tannin, dry extract and natural alcohol. The wine media was quick to acclaim the overall consistency, balance and harmony of the wines following the Union de Grands Crus tastings.

Bill Blatch, the internationally renowned commentator on Bordeaux vintages, described 2005 as “a truly extraordinary year, easy to manage, and without complications.” “The sun shone almost permanently … and what little rain there was fell just before all the vital sequences of the vine’s cycle.” Bordeaux did experience relatively severe, even drought, conditions with rainfall barely half of average, but there were no periods of the torrid heat that beset 2003. The grapes were harvested under warm, sunny skies; the cool nights preserving acidity. Crop levels were modest. The grapes were small in size with a high ratio of solids to juice, and generously endowed with sugar. Few chateaux needed to resort to chaptalization, reverse osmosis or other techniques to concentrate the must.

This tasting focused on the earlier-maturing wines of Pessac-Leognan, St Emilion and Pomerol.

Sub-appellation of Graves producing red and white wine. The well drained soils consist of gravel terraces over limestone and marl. Extensive forest plantations have created a warm microclimate protecting the vines from humidity and wind. Cabernet Sauvignon and Merlot are the predominant red grape varieties with minor plantings of Cabernet Franc and Petite Verdot. The wines are similar in weight to the Margaux commune; perhaps rounder and less tensile, and are typically characterised by scorched earth, tobacco and smoky aromas and flavours.

USA banker ownership currently managed by Veronique Sanders, granddaughter of a former owner. The property is sited on an elevated ridge of sandy gravels over layers of petrified sandstone, near Leognan. The 33 hectare vineyard is planted with 60% Cabernet Sauvignon, 34% Merlot, 3% Cabernet Franc and 3% Petite Verlot. Fermentation/maceration takes 4 to 5 weeks in concrete vats followed by maturation in oak for 18 months (50% new).

Daniel and Florence Cathiard acquired the Chateau in 1990 following disposal of substantial supermarket businesses. Situated in the Martillac commune the vineyard comprises 78hectares with 67 hectares devoted to red varieties and 11 to white varieties. The soils are predominantly gravels with a high iron oxide content. Grape plantings are 55% Cabernet Sauvignon, 35% Merlot, 9% Cabernet France and 1% Petite Verdot. The fruit is fermented/macerated 4 to 7 weeks in wooden vats and then matured in oak for 18 to 20months (60% new).

The oldest wine producing region in Bordeaux with three distinctive subregions; the limestone plateau (Cotes) surrounding the township of St Emilion, the alluvial sandy plain sloping down to the Dordogne River and the clay and gravel terraces of the north west adjacent to Pomerol. Merlot and Cabernet Franc are the dominant varieties reflecting their ability to ripen on the cooler soils.They produce plum, black cherry and liquorice aromas with flavours of fruitcake, tobacco and spice.Wine style varies according to producer but overall tends to be softer, more opulent and voluptuous than the Medocs.

This Chateaux is owned by the eighth generation of the Bouard de Laforest family. The former manager, Herbert de Bouard, has been described by Robert Parker as “The poster child and catalyst for the quantitative revolution in St Emilion” following the introduction of reduced yields, whole cluster ferments in open vats, malo in barrels and new oak maturation. The vineyard is 39 hectares in area and is situated on the south facing Cotes where the soils consist of clay and limestone. Grape variety percentages are 51% Merlot, 47% Cabernet Franc and 2% Cabernet Sauvignon. Vinification is undertaken in stainless, concrete and oak vats and the wine is matured for 18 to 24 months in 100% new oak.

This Chateau has belonged to the Valette family since 1936. It was (until 2014) managed by the late Christine Valette who engaged Michel Rolland as a consultant in the early 1980s. The 33 hectares vineyard is also sited on the Cotes and is planted with 90% Merlot, 8% Cabernet Sauvignon and 2% Cabernet Franc. The grapes are fermented and macerated in stainless steel vats over 3 to 4 weeks followed by 16 to 24 months oak maturation (75% new).

This is the smallest region of Bordeaux situated west of St Emilion. The prime estates are located on the plateau which consists of a complex amalgam of clay, gravel, sand and iron ore deposits. Merlot is the predominant variety followed by Cabernet Franc and the occasional Cabernet Sauvignon and Malbec. Wine style is determined by site and producer but in general tends to be rich and sensual with aromas and flavours of plum, chocolate and exotic spices.

Part of the portfolio of Chateaux belonging to the Moueix family. The vineyard is situated on the northern edge of the plateau adjacent to La Fleur and Petrus. The vineyard comprises 18.7 hectares and is planted with 80% Merlot and 20% Cabernet Franc on gravelly, clay soils. Both concrete and stainless steel vats are used for fermentation/maceration. The wine is aged for 18 months in 33% to 50% new oak.

Acquired by the owners of Chateau Lafite Rothschild from the Ducasse family in 1990 the vineyard has since been extensively replanted and the winery and cellars completely renovated prior to the 2005 vintage. The vineyard area is 22 hectares and is situated on the south east section of the plateau where sandy clay soils prevail. The grape variety percentages are 80% Merlot and 20% Cabernet Franc. The wine is matured in oak for 18 months (70% new) following vinification in concrete vats.”

But before we could wrap our laughing gear around this lot, there was the serious matter of attending to this year’s Annual General Meeting first. Lubricating the meeting were a small selection of ‘conversation wines’ from the Society’s cellar:

What a great selection of wines to get the palate whetted! 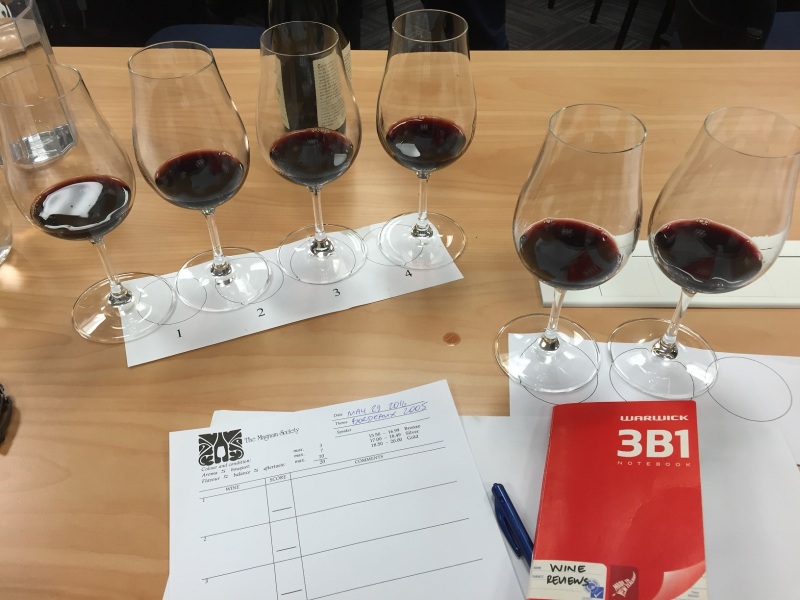 Then on to the featured selection…I discovered that I was somewhat at sea and so inexperienced in describing these wines that I bolstered my notes with the observations of my better-educated table-mates! Still fun learning tho…

Chateau Haut-Bailly: Pesac-Leognan 2005 – $134 – Deep dark blood red. Warm, earthy and savoury on the nose. Dense and earthy on palate too, with rich angular fruit textures. Took a while to open up. Muscular, tensile. Tar and chocolate, with mint.  A hot, dry and powerful finish. 93 points.

Chateau L’Evangile: Pomerol 2005 – $346 – Deep dark blood red. A swirling bouquet to chase of sweet vanilla, deep fruit, caramel and blossom, smoky notes. Layers of deep sweet velvet fruit to taste, with more caramel and the warm of licorice, approaching chocolate. Fine, harmony and balance. A lovely wine with a long and dusty finish. A hard wine not to love – it elevated us to another plateau. One of my two favourites of the flight! 97 points

Chateau La Fleur Petrus: Pomerol 2005 – $134 – Deep dark blood red. I tried two bottles here. The first showed very dumb and lifeless. It was working hard to be anything. My fellow tasters identified a fault, so we had a third bottle opened and discovered a wine that was fresher, aromatic, richer and fruitier. This was probably a case of a better bottle, combined with zero decanting time (the previous wine had been double-decanted since the afternoon). The ‘B’ bottle was distinctive and multi-dimensional – evolved fruit, savoury, earthy, and saline characters all combined. Slightly short in the company,  pleasant though. 89 points

Chateau Troplong Mondot: St Emilion 2005 – $261 – Deep dark blood red. This was drying, and the least evolved. A curious bouquet of brown paper mingling with the usual blackberry and spice. There was power and viscosity on the nose and on palate. Brooding, difficult, unreadable. Chewy tannins, not too joined-up. A classy monumental wine, highly extracted, very modern. 96 points.

Chateau Angelus: St Emilion 2005 – $446 – Deep dark blood red. An ethereal, fabulous wine. An explosion of perfume aromas of sleek red fruit, vanilla and tobacco. Cassis leaf. Dense and elegant and powerful  to taste with sandalwood, oak, & harmonious tannin. It showed sweet and resinous and dusty. A superb wine, refined and opulent. It finished on glorious sweet tannins. My wine of the night. 98 points.

My ‘takeaway’ about these wines would be  several  things – the finesse, depth and persistence of the wines; their age-ability; their ‘sweetness’ on entry; their heat and depth; that they were so dense and youthful after 10 years in bottle. It was just remarkable. I can see now why so many wine lovers are entranced by the wines of this region.

However, I do hope it is more down to the quality and expression of the terroir than just the superlative vintage that makes these wines so delicious.  Bring on the Tranche 2 Bordeaux tasting so I can learn more! 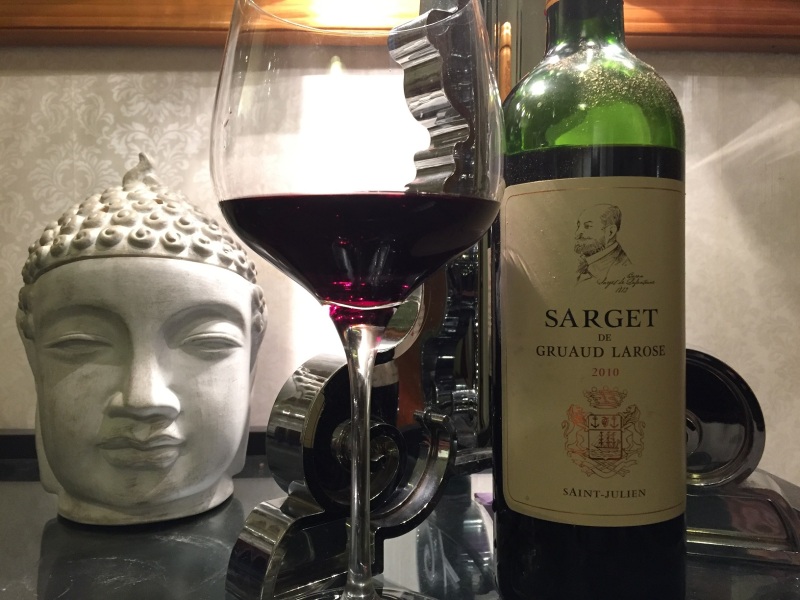 The night before I was fortunate to enjoy a superlative tasting of 2005 Bordeaux’s. My nose and head was still full of sense-memories of the wonderful wines I had experienced from that part of the world*.  I had to keep the feeling going…

So then, this is the second wine of the Second Growth property Ch. Gruard Larose from the appellation of St-Julien in Bordeaux. 70% of the growers grape crop goes into the Sarget.  I bought this bottle en primeur in 2011 from Glengarry, solely on the glowing tasting notes accompanying the offer.

Sweet entry. Black cherry and pepper  showing on the mid-palate. Firm and tannic, this wine is a hefty delight in the mouth. Young too, probably opened 2-3 years too early. Supple and chewy. Showing some tar and tobacco notes also. Drying finish.

This hit the sweet-spot alright!  92 Points