Moderate intensity, a floral bouquet. Soft, with spice, pepper, and some savoury and herbal characteristics. This wine really needed decanting. Splashing helped, but it looked much better the next day.

To drink, the wine showed ripe red fruits, direct and simple. There was balance in the acids, and silky tannins. Good concentration. A long finish.

As I wrote earlier, this wine showed far more attractive on the second night. The age would have helped – it was softer, and the flavours and aromas emerged with more varietal intensity. The first night it had looked like the kind of red cordial that I hate so much about second-label Pinot Noirs. I know it isn’t something that noted producers want to achieve, but I see it all the time – a lack of finesse, grace and complexity straight out of the glass.

Second labels are bought for immediate drinking, not overnight decanting.

L and I and the kids had a fabulous weekend up the mountain. Glorious weather, great snow conditions, a race to compete in, then a night-time torchlit ski procession to honour the memory of a ski-field pioneer. Couldn’t ask for anything more!

I drank this up at the ski-club. Hard to trust my palate at altitude, but here goes…

To drink, the wine was full bodied and round. There were generous flavours of plums and currants. Grainy tannins. A licorice finish with spice.

The next day we lit the slopes. I claimed the position of Lantern Rouge for the skiclub in the Haensli Cup, but the scenery made it all better!

The view from The Knoll T-Bar top station at Whakapapa, looking over the Valley at the Pinnacles.

Over the past few years this wine has been well rewarded in the Under-$25 New World Wine Awards. I have been collecting these wines since 2012. The latest vintage is no exception, and I’ll be acquiring a brace for the Pool Room in due course.

Great depth of fruit and acidity. Just what I want in a Chardonnay. Not too big or malolactic. Nice lemon sharpness and grit. Some secondary flavours starting to emerge like spicy ginger, butterscotch and bitters. Crunchy, lively and so expressive. Great stuff!

This is a new variety for me (if I discount the incredible 1975 Barolo I tasted a couple of years ago).

Jancis Robinson writes about Nebbiolo on her website – www.jancisrobinson.com/learn/grape-varieties/red/nebbiolo: “If Pinot Noir is the world’s most tantalising grape, Nebbiolo runs it a close second []so uniquely delicious that winemakers all over the world are enticed to give it a try.[] Nebbiolo is exceptionally finicky about where it will happily grow and ripen. The Nebbiolo heartland is the tiny Barolo region, a cluster of fog-prone hills around the village of the same []it is not only late-ripening but also early flowering, so there is no point in planting it anywhere that might suffer from spring frosts. []Perhaps the most wonderful thing about Nebbiolo is its perfume. The wine is typically intensely aromatic, developing the most extraordinarily haunting bouquet in which, variously, roses, autumn undergrowth, woodsmoke, violets and tar can often be found – together with a greater variety of other ingredients than most other grapes. On the palate, the wine is typically high in acidity and, until after many years in bottle, tannins.”

This is a blend of Nebbiolo and the vigorous, tart and less flavoursome Barbera grape from the 2010 and 2011 vintages. I have no idea from the bottle or the website as to the relative percentages.

2010 was a good vintage, whereas 2011 was more variable with cooler periods and rainfall and smaller yields.

I saw a very tantalising bouquet on the nose, quite lifted and distinctive, showing cool-climate fruit, forest floor, smoke,  and some green characters. Vanilla and oak are dominant, but there is that beguiling perfume too. Perhaps faulty, but I really liked it.

On palate there a firm tannins, quite dry, with light fruit tending blackberry. There is a slight lack of fruit ripeness, so the wine is not as rich as I had expected, and bears some stalky notes. You could even say it’s a bit rough. Too bad, but not too bad – I think a rough(er) red is a lot more appealing than a soft fruit bomb any day anyway. The nose shows there is definite promise for this variety under the tutelage of Andy Nimmo, winemaker.

Nebbiolo’s are a slow maturing wine. The acidity and tannins here could hold this wine for another 5 years, if the fruit can support it. I’ve got a couple of bottles – I’ll give it a go.

I’ll give it a day to see how it softens in the bottle with some air contact.

The 2013 vintage was a cracker, and 2014 looked good too, so I’d expect a riper example to come rolling down the track in due course.

After two days left alone on the bench, then wine showed remarkably well. The acidity had softened, and allowed the tannins to come forward. Good news for me wanting to keep the other two bottles in the Pool Room for a few more years.

Softened, buttery and rich in the mouth, with a citrus top note. Focused, with a silky mouthfeel.

A ripping bargain! I wish I had a few more bottles stashed away for the approaching summer…

In the glass this is expressing minerality over fruit. Pip fruit flavours. Somewhat flat and soft. A European style of Chardonnay. Some tertiary flavours developing. A dry finish.

A and OB1 gave us a lovely bottle of Aussie Shiraz as a wedding present. After Saturday’s ride, I asked OB1 whether I should ‘drink or hold’? He must have asked A, cos she then came back to me to say that L and I must come over to try a glass and decide for ourselves! And so we did….

Enjoyed on their deck bathed in the sun. The best way to drink a wine from the Lucky Country!

Then we were able to try this beauty…

Then we headed off to J and B’s house for dinner. I brought along a bottle of Pra Otto Soave 2013 which served as a light and pretty aperitif, but this was the star of the meal: 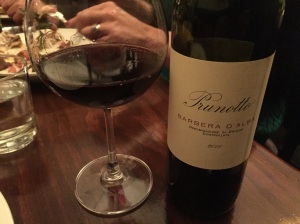 L and I went to Fratelli for dinner with her godparents and another couple from Australia. Old friends of hers and her parents.  We had a lovely time. The food was great.

I shared this bottle of Barbera with the fellas:

Prunotto Barbera d’Alba, made from 100% Barbera, from vineyards in the townships of Barbaresco, Treiso, Alba and Barolo of predominantly sand and clay-based soils. Barbera is famous for its cherry-like tang and strong acidity, but sees some oak aging and 100% MLF.

This wine was ruby red in color with purple highlights. Bouquet of oak and spice mixing with cherries, cured meat and earth.

Smoky to taste, and with deep richness, there are nice fresh flavours of cherry, choc and plums with very fine dusty tannins giving structure and pleasing grip.

I bought this wine at the Gisborne Wine Centre in 2012, following a tasting of this and other Gizzy Chardys. Probably the last of the bottles collected on that visit.

The backstory of this wine: Owner Simon Kirkpatrick said it was an opportune time to pay tribute to his famous uncle and All Black –  Ian Kirkpatrick – and showcase some of the best wine Gisborne and the Patutahi Plateau has to offer.

“The Rugby World Cup 2011 was an historic occasion for us all and we thought it was a great time to commemorate Ian’s contribution to the sport. He amassed 113 matches for the All Blacks, 43 as captain. and is considered one of New Zealand rugby’s all-time greats having played for the All Blacks from 1967 to 1977. He is still held in high regard for his exploits against the Springboks, Australia, France and the British and Irish Lions. For a forward, and playing in an era where only the backs were meant to score tries, his ability to beat players with strength, speed and athleticism saw him score an incredible 50 tries for the All Blacks over his 10-year career.”

Quite a big wine in the mouth too. Round and soft. Receding fruit – golden peaches and dried apricots. My cellaring has been poor and has done the wine a disservice. It oxidised and lost freshness and charm, and really fell apart in the glass the next day. A real shame as it had tasted great in ’12.

A quality drop mis-handled by me. 3+

From the Cellar: Saints Chardonnay Gisborne 2011 – $

This wine is from the bottom shelf. Or near enough to it. It is not a wine you pull out to impress people. Indeed, to even write about it on my blog might encourage comments that I am slumming it. It will certainly not keep the vignerons of Corton-Charlemagne awake at night fearing another Judgement of Paris…

However, it was one of the first wines I ever wrote about on my blog. It started me on my journey of wine writing. I feel a bit sentimental about this product. It is cheap and one-dimensional, but I liked once. I have also learned that a wine has to really bad to be totally irredeemable, and it is also kinda hard to make a really bad wine (blame poor cellaring instead). With a bottle like this, all that can really be expected is perhaps a lack of expectation.

So, when I was building my cellar, with the idea of aging wines and seeing what a bit of age does, I thought, well, why don’t I lay down some $10 cheapies and see if it improves them? Would they oxidise and fall over? Or would they develop an interesting character? Not much to lose, I thought.

2011 wasn’t a great vintage in Gisborne. This bottle has slept long enough.

12.5% alc. Bright yellow; this might be the first hint of trouble ahead?

Funky nose. Bit burnt. Very tertiary bouquet. Toffee and caramel. Oxidative. Hard to pin down individual scents, but it is not unpleasant. It turned out to be a rewarding wine, as the effects of aging were well advanced and visible, but not faulty. It became somewhat of an intellectual exercise to try to figure it out whether it was any good.

It tasted fresher than it smelled. Golden apricots, some crisp acid character. Fine tannins. Long finish. It was more than ok.

This wine has been well-made despite the poor vintage. It will hold perhaps another year.