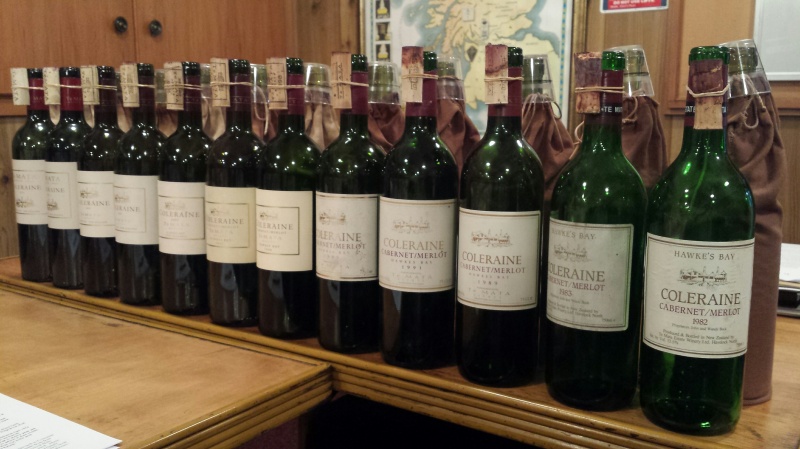 This is the opinion of a few notable palates of the New Zealand wine scene, admittedly encouraged by the superb marketing efforts of the folks behind the winery itself, and this opinion is also shared by several overseas leading palates, namely Jamie Goode and Steven Spurrier.

I am quite partial to the wine myself, though my own palate can best be described as naïve. I was introduced to the ‘00 at a tasting of Te Mata wines back in ‘10, and was I entranced by its quality. I didn’t know a NZ wine would age so well!  Actually, until that time, I had never thought of keeping a New Zealand wine any longer than the thirty minutes it took to get it home from the bottlestore. But life is learning, isn’t it?

Now, however, I am the  proud owner of several vintages of Coleraine, all sleeping it off down in the Pool Room under the watchful gaze of kellarmausefanger Mimi until they hit the Witching Hour of ten years of age. The first cab off the rank will be the 2009. My cellar’s pride and joy is a magnum of Coleraine 2013 (ignoring its admitted rival, 750mls of Stonyridge Larose 2005. Plus a bunch of Rieslings. I could go on).

Geoff Kelly, an aficionado of aged wines, previously a wine judge, and one of the resident wine experts at Regional Wines and Spirits, organised this hugely important look at twelve of the best vintages of this great wine since its inception in 1982. There have been 31 vintages to date, with the 1992 and 1993 not being made due to the localised cool weather influenced by the Pinatubo volcanic eruption in Indonesia, and a later vintage (2011?) which was beset by rain. A large number of bottles had been collected over the years by the late founder of Regional Wines, Grant Jones, and Geoff contributed others to fill the holes. He consulted with Peter Cowley, Te Mata’s longtime winemaker, about what he thought the finest vintages were, and thus assembled a selection for tasting over two nights.

I attended the second helping.

Geoff provided an excellent set of introductory notes, which can be read via the link below, with his carefully considered reviews of the wines themselves. Spoiler alert!

Raymond Chan, another local wine reviewer and judge, also ex RW, and an expert whose writings I admire, and also a long-time fan of Coleraine, he attended the first sitting also. And his informative notes are below. Another spoiler alert!

My good friend GN was in attendance as well, as was a couple of MS members; cracking palates all, plus me, ha! But I’m still at the Bluffing Stage of public winetasting. Again, life is learning, isn’t it?

Interestingly, Te Mata Estate Coleraine Hawkes Bay 1998 was named a ‘Wine Legend’ in the August Issue of UK’s wine magazine Decanter, placing it amongst the greatest wines of all time. The only New Zealand wine to receive the title to date, Decanter’s profile situates Te Mata Estate’s flagship Coleraine beside other ‘Wine Legends’ at more than ten times its price. Hmm. I take this magazine, surface mail, and haven’t seen this issue yet. It will be interesting to sup that one, then.

Time to sniff and slurp. I won’t write up all twelve wines (I leave that weighty task to Geoff and Raymond), but will rather report on my highlights. The wines were served non-blind, in age order youngest to oldest, as 30ml pours. 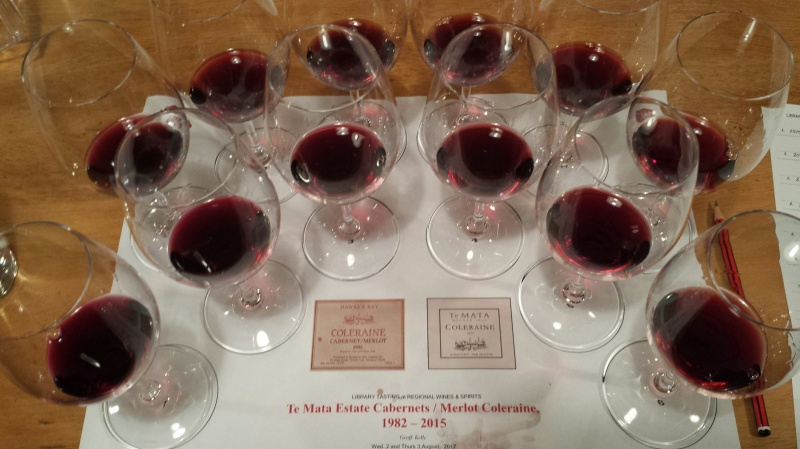 The bouquet, as you would expect, showed evolution as the years progressed. Bright primary fruits to start with the later vintages, tending through secondary characters (cedar etc) in the 2000s, then landing on tertiary notes (tobacco ash etc)  as the decades weighed in from the 90s and back. Colour tended bright deep pink carmine in the young wines, through to darker hues, and tending brick for the oldies.

2015 Te Mata Coleraine, Hawkes Bay – $140! OMFG – This was a great start to the tasting. If I can be presumptuous, the producers are making better wine the more goes they have at doing so, and this makes sense. The vines are getting older. And thus the ‘15 is winner in the making. Bright carmine colour. Sweet red and dark fruits on the nose. Sensitive. Breathy. Fresh fruit flavours. Fresh acidity. Great intensity and length. Bracing. Plush and lush, plumpness and  balance. Three ticks.

2013 Te Mata Coleraine, Hawkes Bay – I have this in the Pool Room. It was a Lauded Vintage in the Bay. Bright carmine colour. More volatile than the ’15. A hint of spirit marker. Dark fruit. An impression of restrained power. There was power and crunch in the in the mouth also. Dense and packed with flavour. Some spice. Gorgeous and concentrated, fine, no oak showing. Fabulous. Three ticks.

2005 Te Mata Coleraine, Hawkes Bay – Dark carmine, tending brick. A packed nose. Delightful. Cedar, chalk, dusty , and cassis. Good fruit on palate. A rich feel of the wine in my mouth. I saw neatness and harmony and symmetry. Long. Three ticks for this.

1982 Te Mata Coleraine, Hawkes Bay – Dark carmine, tending brick. Most evolved, but still holding up with freshness and intensity of fruit belieing its age. An amazing 35YO New Zealand wine, and my Wine Of The Night because of this (beating out the ’91, ’05 and ’13).

My takeaway from this tasting had to be the pleasure in seeing how the bouquet evolved through the years. And how the wine colour changed. It was also interesting to see how the later vintages showed improvements that I can only put down to greater vine age and better vineyard/winery practice which has evolved over the years. Te Mata are making better Coleraines now than they did in the past, in my opinion.

This was a masterclass. Something you get vanishingly rarely with NZ wines. And this may well be the last public tasting of this breadth of Coleraines, until the winery itself opens its cellar at the next significant anniversary. Thanks Geoff, and thanks also to the late Grant Jones.