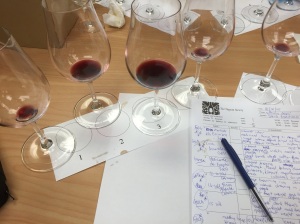 The September issue of Decanter contained an excellent article on the new wave of ‘reformer’ Rioja producers emerging in Spain who believe the current three levels of classification is too simple for such a complex region of terroirs. The traditional small plot sizes of many Rioja vineyards, and the fact that only a few bodegas own their own vineyards, has resulted in a system being established where bodegas purchase fruit from many growers in order to assemble their wines, and the resulting blending process has suited a DOC classification system that describes a style or quality of wine, rather than a wine that is an expression of locality.

This article was an illuminating text to refer to when appreciating the wines of this Magnum Society tasting. In addition, DB, our host, presented these informative notes:

“For this tasting, we will be looking at Rioja, Ribera and Priorat, and the years 05, 06, 09 and 11. All wines fall into the “modern” camp and will be tasted while they are exuberant and fresh, a recommendation some writers are making about these less-than-traditional styles.

You all know about the Rioja. Tempranillo with occasional blending contributions from Garnarcha, Graciano, and/or Mazuelo. Best wines come from the northwest up in the foothills of the Sierra Cantabria in the Rioja Alta or Rioja Alavesa sub-regions, on the north side of the river Ebro. The climate is Atlantic maritime which means the area is cooler and wetter than the Mediterranean and continental regions further inland and to the east. The soils are chalky with various clays rich in trace elements. Wine began here in the early 1800s and many old vineyards exist. Several bodegas remain devoted to historical techniques, and wine styles. Since the 1990s, however, there has been a huge expansion of new wave styles, and, after a false start, a new expression of Rioja has emerged which has taken the modern world by storm. All four Riojas we will taste fall into this category.

The four vintages we will taste are:

2005: An excellent year considered at least as good as 2004 in Rioja. Textbook conditions from the start to finish. Lovely rich balanced wines.

2006: A very warm year bordering on hot with differences in sugar levels and phenolic ripeness. Some fat wines low in acidity. 2

2009: Another hot and dry year with hail. An uneven vintage. Mixed views on the wines although most top wines are outstanding.

Finca Allende Rioja Calvario 2005 Allende was established in 1995. Allende’s signature is a careful balance of tradition and modernity. Their top wine, Aurus, is a blend from nine plots of Tempranillo and Graciano. In 1999, Calvario first appeared as a foil to Aurus. Calvario is from a single vineyard planted in 1945 and generally is 90% Tempranillo, 8% Garnacha, and 2% Graciano. It is aged in new French oak for 14 months. Single vineyard wines in Rioja used to be quite rare but now Calvario is considered to be at least equal to Aurus.

Romeo Rioja la Vina de Andres Romeo 2009 Benjamin Romeo is a rock star winemaker. Think Contador, first made in 1999. Both the 2004 and 2005 were Parker 100 pointers. In 2001, Benjamin debuted a single vineyard wine planted by his father, Andres Romeo, in the early 1980s near San Vicente. The original 2.5ha plot is located alongside the Ebro river and was 100% Tempranillo. This is what we will taste. More recently, Benjamin has added an adjacent plot to raise the total to a huge 3.65ha, and planted a little Graciano. The site has alluvial soil and is warmer than up in the hills giving size and ripeness to the wine. Benjamin uses very gentle hands- on winemaking, malo in new French oak, ageing 17 months in 100% new wood, and bottles without fining or filtration.

Exopto Rioja Horizonte de Exopto 2009 Bordeaux born and trained enologist Tom Puyaubert established Exopto in 2003. While his winery is in Rioja Alavesa, Exopto owns no vineyards but sources from 9ha spread over Rioja. Exopto champions blends. For Horizonte the blend is 80% Tempranillo, 10% Garnacha and 10% Graciano, organically grown, and from vineyards planted in the 50s and 60s. Eight tiny parcels are used which cover a total of 2.45ha and only 850 cases are made. Winemaking appears to be quite conventional. Malo is in oak where the wine ages for 12 months, 80% French, 20% US, one third new, one third 1 year, one third 2 years old. The wine has a reputation for richness, fruit forwardness, and fine structure.

Paganos El Puntido Rioja 2006 One of six wineries owned by the Eguren family (of Bodegas Sierra Cantabria fame) and located at 600 metres in the hills of Rioja Alavesa. El Puntido was founded in 1998 with the winery built in the middle of the 25ha vineyard, which was planted in 1975. Calcareous clay with high mineral presence and a sandstone subsoil. This is ideal for Tempranillo and this wine is 100% and made to be a true expression of what the Egurens feel is an outstanding site. Winemaking is conventional, malo in Bordeaux barrels with 16 months ageing in new French oak.

To remind you about the Ribera: southwest of Rioja, centrally located. Continental climate. High plateau. Large diurnal temperature changes. Chalk and rocky soils. Mostly Tempranillo, but historically has leaned towards blends that evoke Bordeaux structure. Unknown region except for Vega Sicilia until mid 1980s, then growing from nine bodegas to around 300 today. Nowadays, wines vary in style with some quite individualistic examples standing out.

Dominio Pingus Flor de Pingus 2011 Peter Sisseck established Pingus in 1995. He unashamedly set out to produce a “garage” wine using very old vines which had been farmed naturally all their lives. The first release of Pingus created a storm of media attention lead by the irrepressible Mr 3

Parker who called it “one of the greatest and most exciting wines I have ever tasted.” (96 points). He gave the 2004 100 points. The wine we will taste is the Flor, Pingus’s second wine. It is 100% Tempranillo from 16 bio-dynamically farmed parcels, a mix of old and young vines. Conventional winemaking, malo in French oak, 18 months in 2 year old French wood. This wine has variously been described as “big and bold sporting 15.5% alc”, and by Sisseck himself as “finesse and elegance”. Parker: “full bodied, generous, supple”. We shall see.

To remind you about Priorat: 120km southwest of Barcelona, inland from the Mediterranean, high in the Sierra de Montsant. Vineyards on very steep schistous slopes. Very poor slate quartz soils. Low rainfall, very high diurnal temperature change, very low yielding vines. Priorat was virtually unknown until 1989 when Rene Barbier (Clos Mogador) and four others began renovating some old vineyards around Gratallops, and planting some new ones on old sites but with several varieties. It soon became clear that old Garnacha vines, and some Carinena vineyards held the best expression of the region.

The 2011 vintage: fine spring with rain. Cold July. Then immense dry heat through to harvest which was early. Careful selection needed to avoid de-hydrated fruit.

Jose Luis Perez was one of the original Barbier group. He began in 1986 with small very old parcels of Carinena but planted other varieties in new or old abandoned sites. In 1999, he handed over to his daughter Sara who expanded plantings, mostly Garnacha, out to 10ha all on red and yellow slate soils scattered in the hills. Mainly, she used the Coster system whereby bush vines are randomly planted wherever they can be on bare steep slopes, without terraces, orderly rows, or trellising. Sara has achieved organic certification and is moving into bio-dynamics. Total production is now up to 3000 cases which would be borderline uneconomic were it not for her stellar reputation and the wines’ quite high prices. Incidentally, Sara has married Rene Barbier’s son Rene jnr who, in his own right, is becoming the face of Clos Mogador. We have two wines from Mas Martinet:

Els Escurons 2011 4.7ha single vineyard, Coster grown, 600 metres altitude, 100% Garnacha planted in 2000. Known for its purity and elegance. Sara ages half the production in clay amphorae and the other half in barrique.

Cami Pesseroles 2011 60% Carinena from 95 year old vines, 40% young Garnacha. Single vineyard from a very small parcel producing only 1100 bottles. 18 months in French oak. This wine is generally deeper and richer than the Els Escurons, and has been compared to Chateauneuf du Papes.” 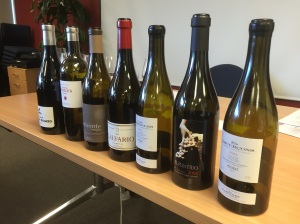 And thus to the wines, 60ml pours served blind, first without and then with food…

The wines had been steadily getting more alcoholic as we moved through the flight…cheery smiles started appearing on our faces…and in the words of HD, “the run rate is getting high, and the batsmen are swinging for the fence” J

This entry was tagged Magnum Society, Off Topic, Rioja, Tasting, Wine of Spain. Bookmark the permalink.