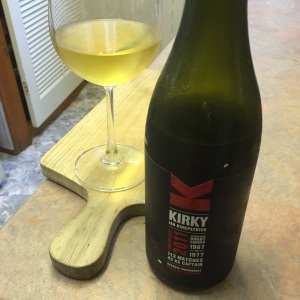 I bought this wine at the Gisborne Wine Centre in 2012, following a tasting of this and other Gizzy Chardys. Probably the last of the bottles collected on that visit.

The backstory of this wine: Owner Simon Kirkpatrick said it was an opportune time to pay tribute to his famous uncle and All Black –  Ian Kirkpatrick – and showcase some of the best wine Gisborne and the Patutahi Plateau has to offer.

“The Rugby World Cup 2011 was an historic occasion for us all and we thought it was a great time to commemorate Ian’s contribution to the sport. He amassed 113 matches for the All Blacks, 43 as captain. and is considered one of New Zealand rugby’s all-time greats having played for the All Blacks from 1967 to 1977. He is still held in high regard for his exploits against the Springboks, Australia, France and the British and Irish Lions. For a forward, and playing in an era where only the backs were meant to score tries, his ability to beat players with strength, speed and athleticism saw him score an incredible 50 tries for the All Blacks over his 10-year career.”

Quite a big wine in the mouth too. Round and soft. Receding fruit – golden peaches and dried apricots. My cellaring has been poor and has done the wine a disservice. It oxidised and lost freshness and charm, and really fell apart in the glass the next day. A real shame as it had tasted great in ’12.

A quality drop mis-handled by me. 3+