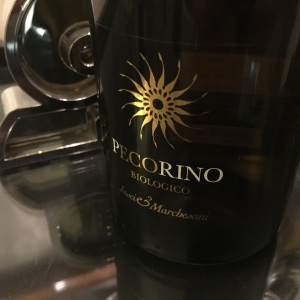 The Pecorino grape was brought back from extinction in the ’80’s, much like the dinosaurs were by the scientists working at Jurassic Park. It is named for the wandering sheep pecor rather than the cheese..

This Italian wine is imported by an old acquaintance of mine. I tried it at an instore tasting, liked, and thought it might appeal to L and wean her off the rosé…

In the mouth it is sweet and slightly spritzy. There are strong flavours of oranges and mandarins, dried apricots, golden apples and spic. Really nice.