Another rosé for L to try. From the Loire, made from Grolleau grapes.

I tried it as an aperitif – wouldn’t trust it against the Murgh Khorma i was cooking. 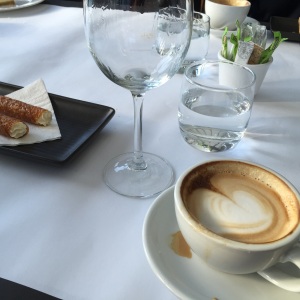 Took a client to lunch at Dockside to celebrate the conclusion of a project.

It was all buttery and biscuit-y white pipfruit tastiness with a refreshing citrus edge. Very good, that.

This Rhone red is fast becoming a favourite of mine, ever since L and I attending a Rhone cellaring tasting late last year. I bought a few for the cellar then, but Regional Wines are still selling it at less than a twenty a bottle…

I have bought this wine for the cellar the past couple of years. Reliable quality at a good price.

Geoff Kelly writes of this wine in his wine review website: “this wine is clearly more aromatic, with a big cassisy component.  One doesn’t know at the blind stage,  but the malbec would be reinforcing that dark cassis. [ ] Palate is intriguing,  being intensely flavourful and sufficiently ripe and rich,  moreso than Awatea.  Yet at the same time, there is a boisterous quality”

You can read more of his review, and of others at:

L’s good friends J and B came over for dinner. They love their Pinot Noir, and have great taste. They know I do too! This wine they brought to share with us while we enjoyed some great scotch fillet steaks together.

Out of Wanaka, Central Otago. Dark carmine. 14% alc. The wine had a lovely savoury nose. Dark cherries and plums. Dried herbs.  Not too big, but a bit going on here nonetheless.

In the mouth there were velvety tannins, lots of fruit, and no metallic notes or bitter finish which can point to under-extraction and high cropping rates. A bit brambly too. 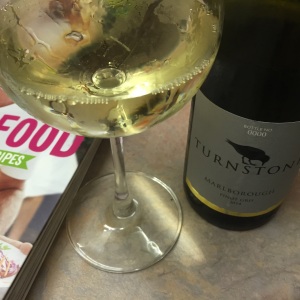 13.4% alc. Brilliant lemon gold yellow. Pear and orange on the nose, with hay barn straw. Very lifted and aromatic and inviting. Promises much..

..and delivers. Pear and crisp apple flavours. Sweet and long. I see honey, and slight bitterness and spice heat on the back palate. A seriously good and tasty PG! 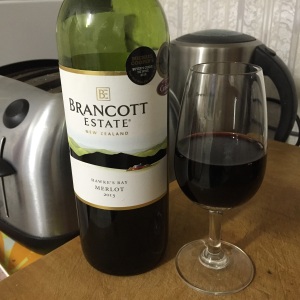 Rich and concentrated in the glass. Lots of fruit, fine tannins. Silky, quite sweet. Nice length.

Great red wine for the price.

Waiheke Island is rich in history; Captain James Cook anchored there during his first voyage around New Zealand in 1769 and taking note of the magnificent stands of Kauri trees, wrote in the his journals that they would make ideal masts for the “Man O’ War” warships for the Royal Navy. On a trip to the island I once found a shard splintered from a stone Maori adze that must have been worked on the very beach I was standing on over a century earlier.

This is a Bordeaux varietal wine made from a family owned wine estate situated in the iron rich clay hills of Waiheke Island off the coast of Aukland in the Hauraki Gulf. Man O’ War is owned by one of NZ’s richest families, the Spencers. They made their money from making a variety of things, including loo roll.

The wine is produced from 45 different parcels of grapes. This vintage comprises 52% Merlot, 27% Cabernet Franc, 10.5% Melbec, 9.1% Petit Verdot, and 1.4% Cabernet Sauvignon. Not sure why they bothered with the last component, no more than a margin of error in quantity…

Deep and aromatic with an intense attack and soft smooth texture following on, and with nicely concentrated black fruit flavours and cedar and spice. Firm tannins and a fantastic finish. Age, grace and power. 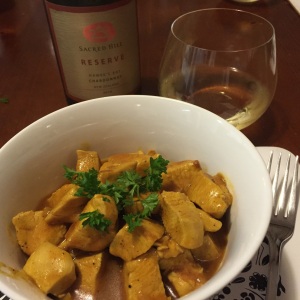 From the producer of the notable Riflemans Chardonnay, the barrel fermentation creates here a soft style of Chardonnay. 13.5% alc.

A bit fat, a bit of citrus, a bit of apple, a bit of dried apricot, a bit creamy. A bit of everything, really.

A bit more individual personality would have lifted the rating…

From grapes grown during a good year from a vineyard at Te Muna Road on the escarpment behind Martinborough township.

A touch astringent at the finish. This bottle was nearing the end of its drinking window. Nowhere near as enjoyable as I was expecting, due its provenance.