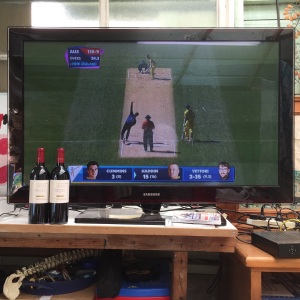 As I have written about before, Wine Enthusiast scored the 2013 vintage of Hawkes Bay reds as a 96, the highest score in the world, so I thought I had better load up the cellar. However my usual suspects have not hit the shelves yet – the producers appear to want to get rid of 2012 stock first.

But to this month’s rescue rides Te Mata Estate. They released their 2013 reds today. I couldn’t get a seat at the showcase tasting this year (grrr…first time in four years I miss out) but the word out on these wines are that they are extremely good, some say the best, from a ‘once in 30-years vintage’. The Coleraine ‘13 is meant to be a revelation (I have ordered two bottles and a magnum to go with my 07, 09s and ‘10s); and this wine below is claimed to be a masterpiece and an ‘Awatea for the ages’. A wine for laying down and avoiding for ten years:

BTW the photo above was taken while I watched NZ teach Australia how to play cricket at Eden Park in the Cricket World Cup 2015…it was close in the end, but we won!