An apres-ski tipple with my fellow RSC club members out on our sunny deck. Note the snow level, and compare to previous post…

Some wines prove not meant for keeping. They are meant to be consumed young. This turned out to be one of those for me. The wine was ok, and the quality fruit and winemaking that went into it meant the aging did it no harm. But neither did cellar time move it along much.

Deep scarlet. 12%. Medium-weight. The wine was unremarkable with little nose and only red fruits to taste. It had dried out a little, and not developed any pronounced age characters to replace the fruit freshness. It would have been better in 2011 I think, though the winery website says it was good for another couple of years yet. 3 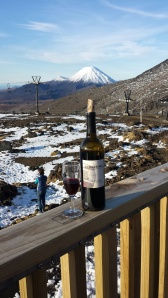 See my post Sept 9th – more US deliciousness…and see the snow level lessen. This has not been a stellar season up at Whakapapa skifield. 4.5

This was consumed at L’s ski-club lower down the mountain another night. This was the real deal as far as cheap, light, fresh, fragrant PNs go. A treat. Bright pinot ruby. 14%. Good bouquet. Ripe red cherries in the mouth. Yum, drink it young and in the sun. Gold medal winner. 3.5

And all the snow melted around my lodge..