In the interests of reducing the effects of Climate Change (in the magnum), I put it in the fridge overnight.

The funk has reduced. Once it has warmed in the glass the wine settles down and is surprisingly very drinkable still. Just as well, there is quite a bit left. Not sure I should have put it in the fridge though – the chilling effect has knocked back the varietal character. The blackberries have morphed into black plums.

At this point a Spaniard would probably add Coca Cola and call the drink ‘kalamuchos’. Ole! 3

NB: at the end of the night, after a long session on the phone with Vodafone setting up a wireless router, my glass had warmed up to the extent that the notes that had so appealed on Day One were coming to the front again!

I may be entering the valley of diminished returns…

On Second Helping, the wine is funkier, the grenache has come forward and blown past any remaining syrah delicacy. A hint of ‘doctors waiting room’. Meaty?

In the mouth it is definitely softer, mellower and less tannic. I guess this is from oxidation as the wine sits exposed to air in the big bottle.

I predict the bottle will push through this ‘difficult second album’ stage and deliver a stadium-filling performance tomorrow. 2.5 Ole! 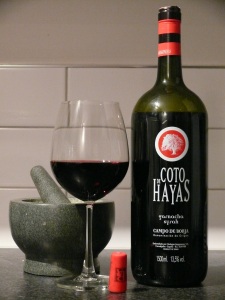 It seems to be Big Gulp month at two of my regular bottleshops:

They are selling magnums of Spanish red at knock-down prices for the Winter Solstice. I have bought a couple – a Granacha Syrah, and a Sangiovese…

Now there is no way I intend to polish off 1500mls of wine quickly – my body is a temple(!) – so I’ll take the opportunity to taste this wine over three-four  nights, and record my thoughts on the evolution of the wine as it is exposed to air. I suspect Day 2 will be the best, but who knows?

The Coto de Hayas has the coolest looking bottle, so it goes first. I have lamb roasting in the oven too. Ole!

Day One: The wine hails from Aragon in north-east Spain. 70% old vine Granacha, 30% Syrah. Colour is deep ruby. It was poured with my wine-air-ater. There is some simple syrah florality showing, and violets. In the mouth it is medium, fruity, a bit grippy, with blackberries. This is easy to drink! Expect lots of toasts from a bottle of this volume. Ole! 3

It is the longest day of the year. And for some it has been a very very long day.

Outside my office window, icy storm-force gales are slowly abating as the worst storm to hit the Wellington region since the 1968 storm that sunk the Wahine moves away. My riding circuit – the south coast – has been smashed by 15m waves. Roofs have been dislodged, and trees ripped out of the ground all over. Ugly. My house got away with only damage to a gate (I think – have to check closely when I get home).

Phew. So now I’m having a wine. Is it safe to Drink and Work? 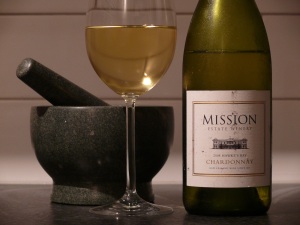 The Mission Estate in the Hawkes Bay claims to be one of the oldest vineyards in New Zealand. It was established as a Marist Community in 1851, with vines planted in 1855 for producing sacrament wine. It is one of the Bay’s volume producers, and is well represented on the supermarket shelves. Don’t know if it is still held by the Church.

The wine I am having tonight – the bottom tier ‘estate’ label – is often on special in the low $ teens. It’s generally a good daily drop, so if I see it heavily reduced I often will buy a few bottles for the Pool Room. This is one of those…

…Pale gold. A waft of phenolics, but this dissipated quickly. Usual suspects of peach and apricot notes on the nose. To taste it is mouthfilling and rich, with apricots again; not too heavy, oaky, and with vanilla. It’s a mid-weight wine, and is showing the age. The years add interesting depth and character. But it is as mature as I should let it get – past this date the acid and fruit would increasingly give way to the oak which would then show through as bitterness.

Not everyone’s choice, but I like it ok. The label could do with a birthday, and channel the whole Bordeaux histoire thing. 3.

Elwood Blues once said, “Whaddaya get for nuttin? A rubber biscuit? You throw it against the wall, it bounce back into your mouth. If it don’t bounce back, you go hungry.”

I’ll be the first to admit that this is not likely to be one of NZ’s great pinots.

It was a freebie, given out to all entrants of the annual 101km Forrest Estate Graperide cycle fun ride who had completed the previous year’s event. As legend sez, 100 grape-pressing virgins foot-press a vat of grapes after the ride; the juice is then bulked out, vinted,  and bottled as 100 Virgins, and then handed out the following year.

This is version 2010. I would have normally necked my bottle the moment I got back to the motel, but for some daft reason I held on to this one, and others since. Cycling mates have told me this wine is not great, but I thought a little age might bring out whatever goodness resides within…

Hmm, pinot noir ruby…some light florality, with raspberries and blossom. Very light in the mouth though, short on fruit concentration, thin and austere, some overcropping perhaps. Fills a gap, but not much gladness here. Disappointing. 2.

It’s not all bad tho. The first year I did the Graperide, 2010, I needed a wine for the potluck meal at the motel that first night. I bought a 2005 Cornerstone Cab Merlot from the vineyard. It was a revelation, and I have been following the Wine Star ever since…

I was driving back to Wellington from my parents 50th Wedding celebration, and just HAD to stop again at the Ohau Vineyard to pick up a bottle.

I bought the Woven Stone Pinot Noir last time I was there (excellent), so re-tried their two Sauvignon Blancs I tasted on my first visit and chose from them. The ‘first’ label Ohau Gravels Sav has 5% wild fermented in oak, so it was a little more restrained and ‘together’ than this one, and a few dollars more, but they were both good value at the cellar door.

I preferred this one of the two…the wine is the colour of warm straw… very fresh and elegant. I like. There are gooseberries and limes on the nose, with the same concentrated fruit flavours on the palate, smooth not grippy in the way of Marlborough savs; and a long finish to finish.

The next day: even better – richer, deeper; warm chardy characters, I swear there is some honey in there! 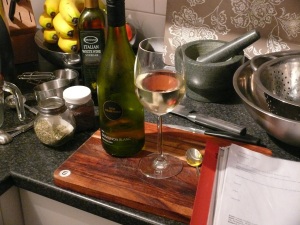 According to the Kim Crawford Wines media release in February 2013 this Sauvignon Blanc is a low calorie wine. It is made in a lighter, lower alcohol style, pitched perhaps as a lunchtime quaffer when you need to achieve more in the afternoon than just sleeping off the lunch…

12% alcohol, and light in colour. On the label there is no region attributed to the supply of the grapes, and this combined with the lighter style the winemakers are going for, I see none of the tomato stalk / herby notes on the nose that I would see in a typical Marlborough grasscutter. Perhaps grown in a warmer clime around Auckland or the Hawkes Bay? Anyway, the nose gives nothing away.

Ditto in the mouth – the wine is soft, fruity, and too short in acidity for me to be anything more than a Wet ‘n Forget-ter. Still, approachable and pleasant enough to drink, and it’s good to have a less ‘aggressive’ NZ Sav wine style available to the consumer. Plus it held up ok against the vinegar aromas of pickle-making I’ve got going on in the kitchen (cucumber, cauli and onion – yum). 2+

Friday yayday: knock-off time at work.  And time to knock the top off a bottle of wine.

Huntaway Reserve Gisborne Chardonnay 2011 – $$ –  from the Lion stable of brands. I hope it washes away the ugly memory of that Makaraka ‘pinot noir’ that I, ahem,  enjoyed a fortnight ago.

A bit of bottle age here, a deep gold colour in the glass. I smell spicy biscuity warm aromas with white peach. In the mouth; smooth and integrated oak and fruit, more peachy flavours. Creamy malo. If I have any criticism it is that the wine is a bit simple.  Also, I think a value wine should be fresher in it’s fruit character, but it probably was, in its youth. 3 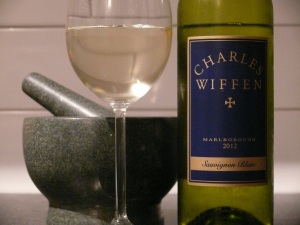 I bought this wine from Regional because it has the coolest label.

I also like their pinot noir: I tasted a good bottle last year, and bought one for the Pool Room.

The proprietor’s family have owned the land in the Wairau Valley since 1907. It was first planted in grapes in 1980, which were contract-grown for other wineries, before the first release under the Wiffen brand was issued in 1997.

It’s the palest straw in the light. The wine is leggy when swirled.  The nose is definitely Marlborough varietal with green apple and grass and gooseberry notes. It’s warmer on the palate than the smell would indicate. I taste citrus, and there is the crisp acidity we should see. It hangs around the back of the throat nicely.

Give this one a go, peeps, and support the smaller grower. 3.5